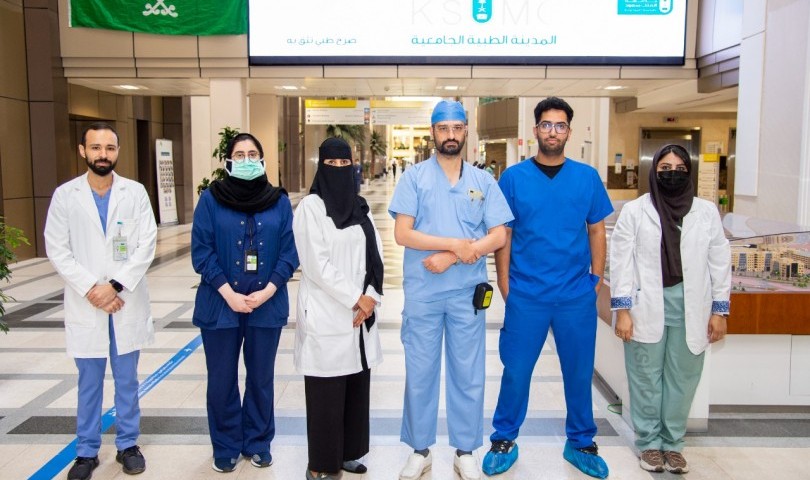 A medical team at the Department of Surgery at King Saud University Medical City saved the life of a resident who was seriously injured due to falling on several steel bars.

Noura Al-Subaie, a consultant in accident and trauma surgery at KSUMC, explained that the Accident and Injury Team worked on operating the case at the Emergency Department. The patient had three steel bars penetrated his body and settled in critical places. After making the clinical examination and the necessary ultrasound and x-rays, he was transferred directly to the operating room within 20 minutes of his arrival.

The x-rays showed that the first steel bar penetrated the right part of the groin area in line with the secondary and primary femoral artery and vein with the abdomen, along the major iliac arteries, reaching the arteries of the right kidney, and settled along the duodenum, resulting in a slight injury to the duodenum. The x-rays showed that the second steel bar that penetrated The lower abdominal area was below the navel, which led to the damage of the small intestine in four regions and settled in the upper part of the stomach after penetrating the back front wall of the stomach. Luckily the bar did not penetrate The spine.

Dr. Al-Subaie stated that such injuries require surgery through a skilled surgical team with a high degree of skill because of the extreme danger to the patient's life. Regarding the stages of the operation, Dr. Al-Subaie explained that the first steel bar was extracted after controlling the major arteries, while the other two bars were removed very carefully so as not to affect the organs surrounding the affected area. The affected organs were restored as a result of this injury.

Honoring KSUMC as part of the celebration

During the final ceremony of the exhibition held to celebrate

Her Royal Highness Princess Adela bint Abdullah, the Chairman of

“They Inspire Us with Hope” Event Organized

Under the slogan “They Inspire Us with Hope,” the KSUMC

"Sharik 3" Exhibition, organized by KSUMC, was launched to promote